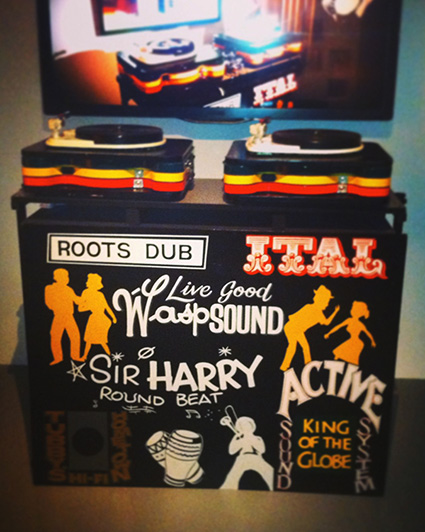 Say Watt?
the cult of the sound system

Bulky, big-ass loud speakers, block parties, loud mobile sound systems – we've all seen this expression of music and culture. Mostly identified with Jamaican and US ghettoes, it has influenced and inspired similar movements in other parts of the world. Gaîté Lyrique's exhibition "Say Watt? the cult of the sound system" explores this phenomena and explores the way it has changed the way we listen to music.

La Gaîté lyrique is the place for cultures in the digital age, a place that studies the present and imagines the future. At the crossroads of creative expression, innovation and digital cultures, it transcends genres to explore contemporary music, the visual arts, cinema, games, design, the web. A place of exchange and discovery in the heart of Paris. Personally, this exhibition was of interest to me due to my involvement, many years back, on a project for the Experience Music Project, the non-profit music museum in Seattle. I was fortunate to work with the good folks at Triplecode (on interactive storytelling and user interface concepts) for "Streets of Kingston." A kiosk which educates visitors about the history of music in Kingston, Jamaica.

Sound systems, portable audio systems, mobile discos... The terms may vary, but one fact remains a constant: the invention of this form of musical expression came from the streets. From raves in Europe to demonstrations from Kingston to Belem, from France to Colombia by way of Kenya and the huge K7 sound players favored by rappers, the amplified sound of sound systems has been the common ground among popular and musical gatherings these past few decades.

And what started out as nothing more than a portable disco in the ghettos of Jamaica or in U.S. basements in the 50s has revolutionized the way we listen to music. Since then, radically different cultures have adopted this cult object, making it their own through all manner of tinkering and manipulation.

Regardless of where it sets down its speakers, sound system culture remains a phenomenon on the fringes, obscure and unsung, drawing its origins from a need for the street. The introduction to this exhibit takes a furtive approach to the visual, sound and "philosophical" aspects of this mysterious underground culture. In the second part of the show, Say Watt? pays emphatic tribute to Jamaica, a country that managed to turn its showoffs with sound systems into authentic icons of street culture, superbly brought to life by the photography of Beth Lesser, an adventurous Canadian who set off to document the effervescent scene of the Kingston demi-monde in the early 80s.

Radio Raheem, named after the character in Spike Lee's film Do The Right Thing, who never went anywhere without his giant boombox, the third part of the exhibit logically takes its saga to the Bronx, figuratively and very literally, since the first rapper ever recorded in the annals of History, Kool Herc, was... Jamaican who emigrated to New York!

To finish, on of my favorite parts of the exhibition was the rediscovery of Babylon. Written by Martin Stellman (Quadrophenia, 1979), Babylon tells the saga of a small music-loving mechanic, staggering through an England sold to "Yard" as a mirage with streets paved with gold. A documentary and social work of fiction, the Jamaican-centric counterpart of Shane Meadows's This Is England (2006) that explored the roots of the Skinhead movement, this film is a unique account of the reggae sound system scene in Thatcher's England.